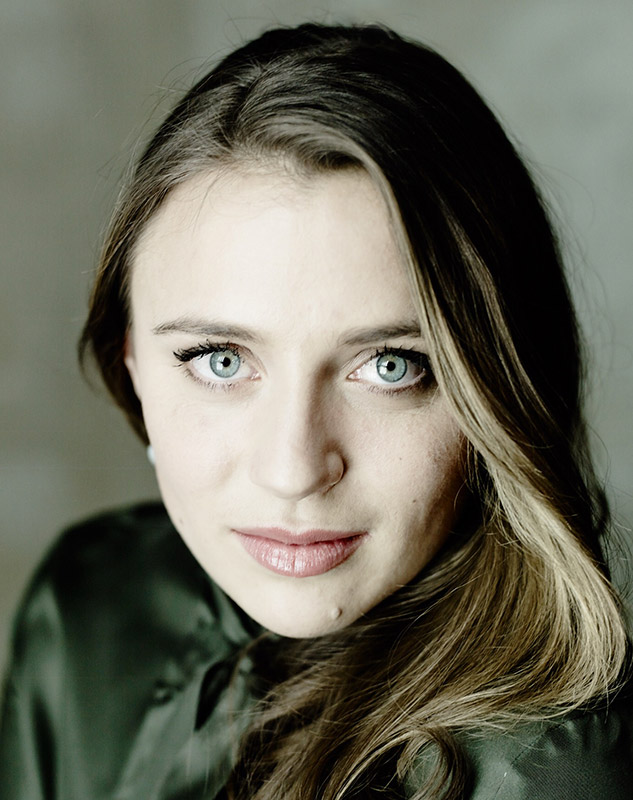 Esther Dierkes is a scholarship holder of the “Richard-Wagner-Verband”, received the scholarship of the Catholic Study Foundation “Cusanuswerk” and was also supported by the “Da Ponte” Foundation and Yehudi-Menuhin “Live Music Now” e.V.

During her studies in the class of Prof. Hedwig Fassbender at the Academy of Music and Performing Arts Frankfurt am Main, Esther Dierkes performed at the Frankfurt Opera and made also her debut at the Staatstheater Darmstadt and the “Festival of Young Artists” in Bayreuth.

Under the patronage of Anna Netrebko, she performed at Esterházy Castle in Eisenstadt as Gerda in the premiere of Sergei Banewitsch’s opera The Snow Queen, followed by her debut in Donizetti’s L’elisir d’amore at the St. Margarethen Opera Festival.
In 2015 she sang the Costanza in Haydn’s L’isola disabitata at the Rheingau Music Festival.

Since the 2017/2018 season, Esther Dierkes has been part of the ensemble of the Stuttgart State Opera, where she already sang Gretel in Humperdinck’s Hänsel and Gretel, Pamina in Mozart’s Die Zauberflöte, Zerlina in Mozarts Don Giovanni and the female lead in the world premiere of Hosokawa’s Erdbeben.Träume.

In 2018/2019, she performed the roles of Mimì (La Bohème) and Ninetta (Die Liebe der drei Orangen) in Stuttgart and made her debut at prestigious Glyndebourne Festival 2019 and at the BBC Proms as 1. Dame in a new production of The Magic Flute.

In 2019/2020, Esther Dierkes will be heard as Susanna in a new production of Mozarts Le nozze di Figaro, Vierte Magd (Elektra), Micaela, Pamina, Ninetta and Mimì in Stuttgart.